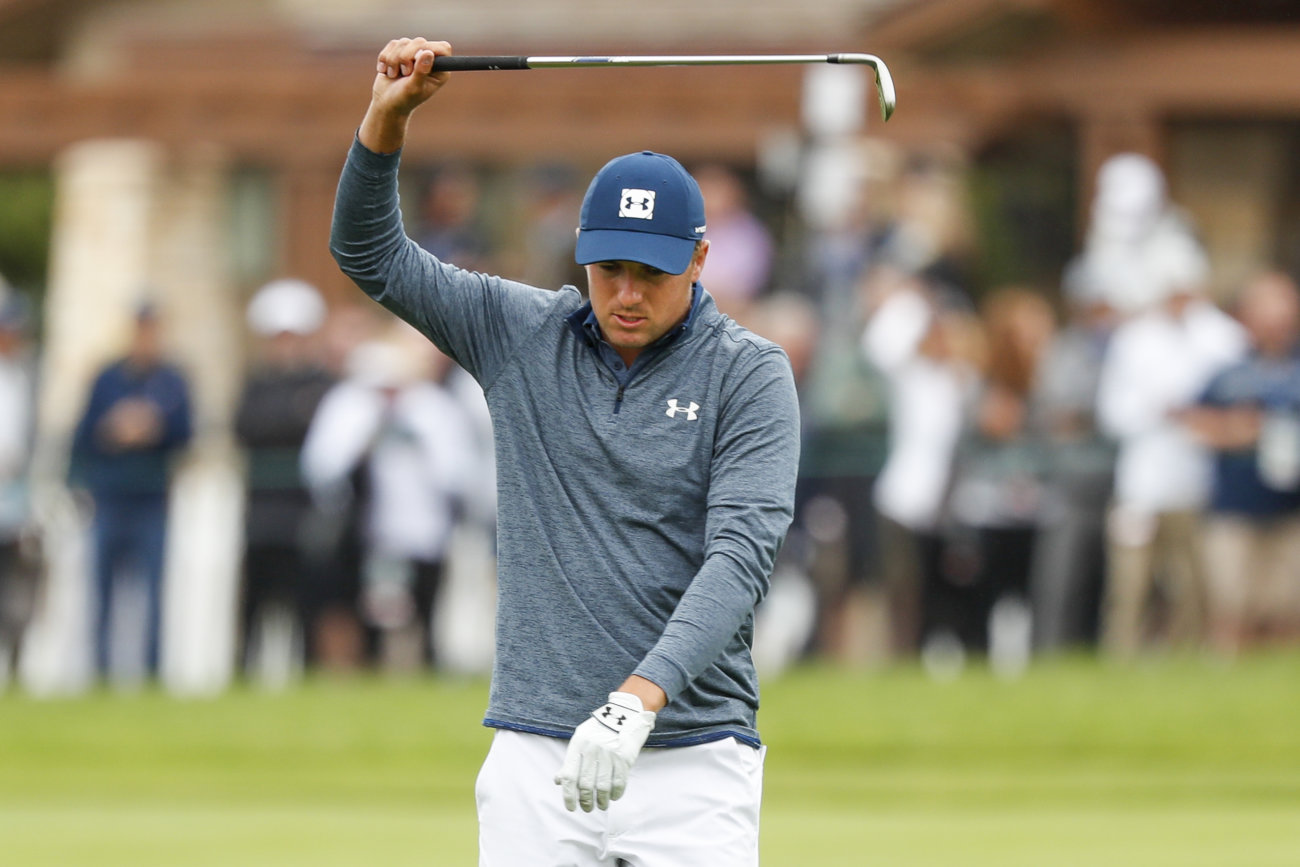 PEBBLE BEACH, CALIFORNIA | For Jordan Spieth, if it’s not one thing, it’s another.

If it’s not a 4-iron shot that runs out more than 270 yards and over the cliff on Pebble Beach’s famous eighth hole, it’s a bunker rake hidden in the high grass that snagged a second shot that may or may not have been special.

If it’s not another birdie (Spieth has made nine of them over the first 36 holes), it’s another bogey (he has made eight of those so far).

If it’s not a monologue from the game’s most open-mic player, it’s a generally one-sided conversation with his caddie Michael Greller, sometimes crisply worded to vent the frustration that is inevitable from a perfectionist in an imperfect game.

As the U.S. Open weekend arrives at Pebble Beach, Spieth finds himself far enough behind to need something special to thrust him into serious contention but close enough to potentially make it happen.

“To be under par at the U.S. Open with eight bogeys in two days means things are in a good place,” said Spieth, who has tacked together rounds of 72-69 in soft conditions at Pebble Beach.

Here’s Spieth reasoning regarding his position: Were he 1-under par having made only two birdies in two days, he’d be concerned because forcing birdies is a dangerous tactic at U.S. Opens. The trick, Spieth believes, is eliminating the mistakes that lead to bogeys such as dull iron shots and inconsistent wedge play.

On the bright side, Spieth has made more birdies than playing partner Justin Rose, who finished Friday six strokes ahead of Spieth and seven clear of his other playing companion, Tiger Woods. Still, there is work to be done, and perhaps even a touch of magic required, if Spieth is to factor into this championship story.

No sooner had the television microphones picked up Spieth complaining that he’d hit two perfect shots and wound up with a water ball and a buried lie in the rough – essentially saying both were Greller’s fault – than a social media frenzy erupted, castigating Spieth for his reaction.

He endured two quirky days getting to this point. On Thursday, Spieth made a mess of the eighth hole, hitting his aforementioned tee shot over the cliff then flying the green with his approach shot, mistakes he immediately laid at the feet of Greller.

No sooner had the television microphones picked up Spieth complaining that he’d hit two perfect shots and wound up with a water ball and a buried lie in the rough – essentially saying both were Greller’s fault – than a social media frenzy erupted, castigating Spieth for his reaction.

Part of it is Spieth being Spieth, airing what he’s thinking when others might keep it seething inside. He brushed it off after the round, saying it was a matter of releasing his frustration but it had a harsh tone when it happened.

“It’s kind of all the stuff I used to hold in my head before (that) I’m able to kind of just fall out now,” Spieth said when asked about his long relationship with Greller.

When Spieth attempted a difficult second shot from a fairway bunker at the par-4 second on Friday – a 200-yard 6-iron from a slightly downhill lie – his shot clipped the thick grass then rattled immediately into a bunker rake he hadn’t noticed.

The ball stopped immediately, digging itself into thick grass and Spieth did very good work to make a bogey from where he was. He also took the blame for not moving the rake rather than laying that on his caddie.

“That’s on me,” Spieth said. “I just got to look at all options ahead of me. If there’s rakes in front of the bunker, typically we pull them out but when I was in it, I couldn’t see it. So it was kind of a weird set of events.”

It was a fascinating two days watching Spieth play with Rose and Tiger. For 36 holes, Rose was marvelously efficient, needing just 49 putts over two rounds. He was better Thursday than Friday and set himself as perhaps the player to beat this weekend.

Woods, meanwhile, spent Friday playing defense after continually hitting Pebble’s tiny greens in the wrong spots, putting defensively on downhill putts a day after giving himself plenty of chances to be aggressive on uphill putts.

“I’m rolling the ball really well on the greens. Still haven’t made anything in the mid to long range and I’ve burned a lot of edges from that distance, my speed control is fantastic this week and I feel really solid inside of 10 feet,” Spieth said.

“So it’s not far off, it’s just a little click here or there to start trusting it more out here.”

Jordan Spieth reacts to his approach shot on the first hole during the second round of the U.S. Open. Photo: Chris Keane, Copyright USGA